As a woman, you have probably thought about getting a weapon in the form of a taser for your own personal protection.

Or, perhaps you’re a man who is concerned about the safety of the women in your life, and you’ve decided to buy them a taser. But, before doing so, you want to know what the best budget-friendly taser for a woman is. Well, we’ve listed a few of the most popular, most affordable, and most reviewed tasers for you below. Read on to find out more!

This lightweight, rechargeable stun gun is easy-to-use and pretty handy, as it comes with a built-in flashlight and a wrist strap!

It weighs 0.5 pounds and measures 5 x 2 x 1 inches, which is about the length of a TV remote. But, don’t let its size fool you. This compact, yet powerful device is used by both professionals in the security industry and ordinary citizens at a very affordable price.

Another great feature of this device is its design. Its rubber-coated body has convenient finger grips on one side and a safety switch and trigger button on the other.

These strategically placed features allow the user to quickly turn the flashlight on or off or press the trigger button to stun an attacker. 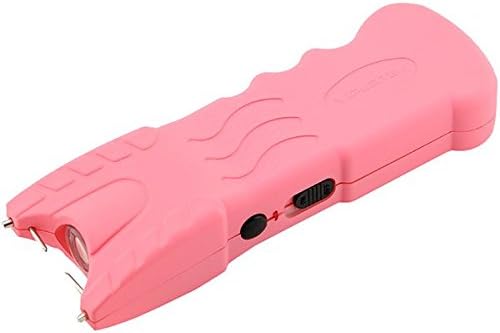 The Vipertek VTS-979 Stun Gun is a good option for women who want a lightweight, easy-to-use stun gun with the convenience of a built-in flashlight.

The SABRE brand has long been associated with high-quality safety products, so it’s no surprise that this SABRE stun gun with a built-in flashlight is rated among the best budget-friendly tasers for women.

Like the other tasers on this list, it has a rechargeable battery, rubber-coated body, and conveniently positioned buttons. It also has a switch to turn the device on and off and prevent accidental discharge.

The SABRE S-1005 Stun Gun is ideal for women with smaller hands who want a simple, discreet, lightweight, yet powerful stun gun.

Another great, budget-friendly stun gun for women from SABRE is this handy self-defense kit.

This kit includes a canister of pepper spray small enough to fit in the palm of the hand and powerful enough to reach an attacker standing 10 feet away. The canister also features a flip-top designed to prevent accidental spraying.

This compact stun gun is less than half the size of the S-1005, but it packs the same powerful 1.60 µC charge and 120 Lumen brightness according to the specs.

One unique feature is the retractable built-in charging plug which plugs directly into the wall, that way you don’t need a charging cable. 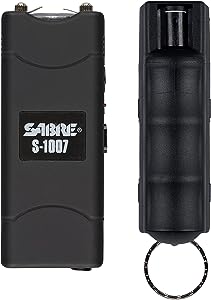 Another popular brand of self-defense weapons is Police Self Defense Products. This brand offers a very effective stun gun, not to mention the most affordable on our list. It also comes with a built-in rechargeable battery, stunningly bright flashlight, and compact design.

One very useful standout feature that users like is the battery indicator light on the side of the device.

Its convenient size (4 x 2 x 1 inches), compact design, and lightness are perfect for women with small hands. Like the other stun guns on this list, the POLICE 1901 also offers a rubberized grip, an on/off flashlight switch, and a trigger button. 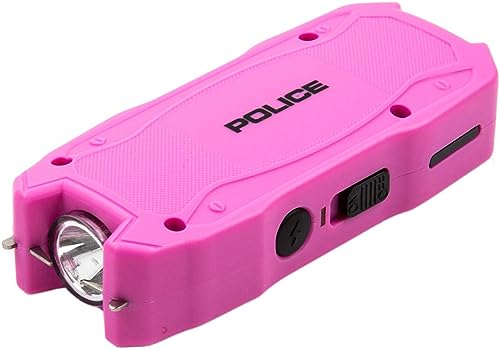 The POLICE Stun Gun 1901 is a good choice for women who work at night and need an effective, yet cheap stun gun with a bright flashlight.

This stun gun is the smallest entry on our list, not to mention the only smart device.

What makes it smart? Its touch sensors located on the side of the device can sense when your finger is on them, which turns on its discharge capability.

After touching this part of the device, which also turns the flashlight on, all the user has to do is press a button on the opposite side to discharge the device.

Measuring only a few inches, this lightweight, personal defense product is one of the most discreet stun guns for women. 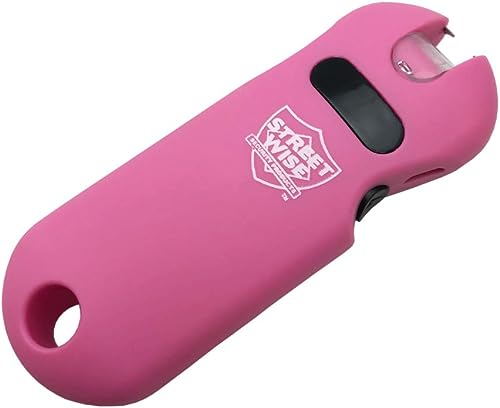 This device is ideal for women who might want to hold the taser in their hands while walking, especially if it’s during the night or in an unsafe place.

What Is a Taser?

While we use the word “taser” interchangeably to refer to any handheld weapon that produces an electric shock, a taser is a device that emits two darts that deliver an electrical charge when fired.

These tiny darts puncture the skin or clothing and remain attached to the taser via very thin wires through which the current flows.

After firing a taser, those thin wires cannot be reused. Instead, a new cartridge containing a new set of wires and darts needs to be reloaded into the weapon. What Is a Stun Gun?

A stun gun is also a weapon that functions by producing an electric shock.

The difference between a stun gun and a taser is that a taser uses wires to transmit an electric charge to the intended target, whereas a stun gun has to come into direct contact with the target in order to deliver the shock.

This means that you can use a taser from a distance, but you would have to get close to your target when using a stun gun. If a significant electrical charge enters the body, it will interfere with the nervous system. These weapons can potentially cause heart attacks and, if used improperly, death.

However, that should not deter you from getting a taser for your own personal protection. It is always better to protect your life than to allow yourself to become a victim of a crime.

Before you buy a taser, you may want to consider the following.

The Power of the Electric Charge

While you might see some tasers boasting 22,000,000 or even 95,000,000 volts, this does not mean that these tasers will deliver the power of a lightning bolt through your stun gun to the attacker.

It is important to take note of the charge listed on the weapon. If it is listed, you will see it in front of “µC” (micro coulomb), which is the unit that electric charge is measured in.

The charge is directly related to the intensity of the shock your device will deliver. According to a report by the National Institute of Justice, 1 µC might be enough to deter your attacker.

The Size of the Weapon

A taser for women will likely be designed a little differently from a taser specifically made for men. So, you want to take note of things like the grip, size, and weight of the taser or stun gun.

It is always a good idea to look for additional features like a built-in flashlight, alarm, wrist strap, and keychain holder.

The most widely used stun guns on the market today can cost anywhere from several dollars to several hundred dollars. It all depends on the type of weapon, design, and intended use.

How to Safely Store or Carry a Taser

Most tasers come with a carrying case or holster that can be attached to a belt. These can be used to safely carry your taser with you on a daily basis.

In some instances, these cases might not last you very long and may end up being too tight or too loose around your weapon. A simple solution to this problem would be to buy a well-designed, good-quality holster big enough to hold your taser securely.

If you don’t intend to use your taser regularly, you can choose to store it away in your house.

Keep in mind that if the device comes with a safety pin, you can remove it and store it in your house even if you have kids. So, there’s no need to use a gun safe with this kind of case.

However, it’s always best to keep weapons like these far out of the reach and sight of children.

What Are Some of the Best Brands of Tasers?

Based on our research and reviews from buyers, some of the best brands of stun guns are Streetwise Security Products, SABRE, and TASER.

The TASER brand name is as old as the product itself since the device and its name were created by the same man, Jack Cover. In the early 70s, Cover finished working on his new invention, the TASER, which he named after the children’s novel Tom Swift and his Electric Rifle.

Streetwise is one of the newer brands on the market, but it has already established itself as a well-known supplier of electroshock weapons. These include stun guns disguised as various women’s items, including a perfume bottle and a razor.

Do All the Stun Guns Listed Have Safety Features to Prevent Them from Accidentally Going Off?

The Vipertek VTS-979 has the most safety features, including a built-in safety switch that the user must slide into position to discharge the device. It also comes with a safety pin attached to the wrist strap. In the event that an attacker grabs it from the user, the pin will detach from the device and stop it from working.

All the other devices mentioned, except the Streetwise Smart Keychain Stun Gun, have an on/off switch.

Can I Fire a Stun Gun from a distance?

No, these devices must come into direct contact with the person’s body to cause them harm.

Do These Tasers Come With a Charger?

Most of these devices do come with a charger, and all of them come with a built-in battery.

Can I Accidentally Shock Myself With the Streetwise Smart Keychain Stun Gun?

Since this stun gun does not have a safety switch, it depends on where you position your fingers on the device.

Tasers can be a bit loud, but certainly not loud enough that you would need ear protection!

While each of these tasers for women listed above is affordable, the best one for you depends on several different factors. This includes the size of the stun gun you can handle most easily, the color preferences you may have, the number of safety features you want on it, the amount of charge it carries, and the type of charger it works with.

If a device that requires you to get up close to your attacker to stun them doesn’t work for you, you might want to consider getting a device that allows you to fire from a distance.